First of all, the hit movie from back in the day Coming to America featuring Eddie Murphy, Arsenio Hall, James Earl Jones, John Amos and more is hands down one of my favorite films. Before there was Black Panther this movie vibrantly showcased the extravagant lifestyle of King Jaffe Joffer and Queen Aoleon as their son Prince Akeem set to explore America in Queens, New York to sew his royal oaks. However, Prince Akeem’s truest mission was to find a wife especially after landing eyes on Lisa McDowell played by actress Shari Headley. The film is a perfect combination of humor, black power and romanticism all in one.

In between flights, I caught a glimpse of a headlines stating there will be a Coming to America 2 and instantly I took to the internet to confirm what I saw. In discovering several reputable media sources, it’s official in the year 2020 we can expect the release of Coming to America 2. It has already been confirmed actors Eddie Murphy, Shari Headley, James Earl Jones, Arsenio Hall, John Amos and Paul Bates will return to shoot the sequal. Plus a new celebrity list of actors to add the to reunion cast such as: Wesley Snipes, Leslie Jones, KiKi Laynes, Rick Ross, Teyanna Taylor and Michael Blackson.

The premise of the story line goes a little something like this. Prince Akeem is set to become King of Zamunda, but he discovers he has a son he never knew about in America. Akeem and Semmi (Arsenio Hall) return to America to honor the King’s dying wish to groom this son as the crowned prince. Now I am not sure how they are planning to bring this storyline to life; nevertheless, I am sure with Black-ish creator Kenya Barris is drafting the script along with Craig Brewer as director and Academy Award winner Ruth E. Carter as the costume designer this film could be a another cultural revolution. 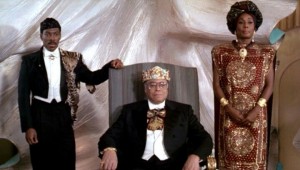