What was meant to embarrassed and poke fun at the veteran actor most of us remember from the Cosby Show back in the day has dramatically changed his life over the course of the past few days. The trajectory of Geoffrey Owens life has totally shifted by the revelation of a picture that went viral of Owens working at Trader Joe’s.  The woman whom took the picture was in disbelief about the actor actually working as a cashier. Although later, we learned according to Baller Alert the woman wanted to issue an apology to Owens for sharing the picture on social media.  However, I believe this was God’s way of opening a door of opportunity. 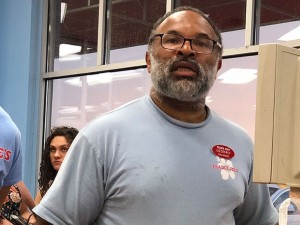 As a result, this one single image revelation has brought Owens back to television to share his story on many news networks, Producer Tyler Perry made an offer and Owens accepted and the incident raise a consciousness to the value of honest work.

At the core, I sincerely hope Geoffrey Owens story encourages the world to take a second look at ourselves and how we judge people based on job classification.  There is no shame in resorting to any extent necessary to provide an honest living for yourself and your family. The dream is one thing, but the grind is real.

We are one picture, one step, one moment away from an opportunity. The older I become the more I realize the old adage, if you be faith over a few things, God will make you ruler over many.  Despise not the days of small beginning because it is only a setup.

Written By
Sammi Haynes
More from Sammi Haynes
At the start, I struggled with posting this blog thinking about the...
Read More