Atlanta’s creative artists and fashion enthusiasts were given an opportunity hosted by SCAD Atlanta to sit at the feet of a scholarly aristocrat in fashion to listen and absorb the narrative of his life a legendary storyteller, a historian and a curator in the architecture of fashion, Mr. Andre’ Leon Talley.

The moment of introduction to the entrance of Mr. Talley onto the stage the audience and I were on the edge of our seats waiting to hear his life’s journey in the world of fashion. For me, it felt like a dream come true to be in the same room with someone I’ve observed for many years.  As a man of color sitting in the audience listening to his lecture before the featured film about his life, it felt like a Prince receiving instructions from the King on the proper etiquette to reign superior and dominate your territory/world.

Mr. Talley’s dolce’ is impeccable from a volunteer with the legendary Diana Vreeland at the Metropolitan Museum in New York, Women’s Wear Daily, former Editor at Large at Vogue Magazine, Judge on America’s Next Top Model with Supermodel Tyra Banks and this list only scratches the surface to the beginning of his notable accomplishments. I’ve read every book he’s written and Talley is literally a walking bible to the world of fashion. His persona precedes him distinctively. Talley is iconic for his kaftans, vibrant usage of words, acute execution of French, unprecedented knowledge, advisor in style and larger than life personality.

I must confess the André Leon Talley lecture planted a seed in my life I will never forget. 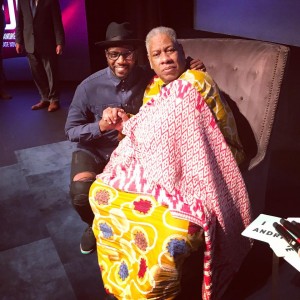 His latest film The Gospel According to Andre is an extraordinary film about his life, the glitz and glamour but also reveals his challenges to being at the top in the fashion industry as a tall, bodacious black man. What I loved about this film, Talley never forgot his roots in Durham, North Carolin and undying love for his grandmother, Binnie Francis Davis.

Here is the Official trailer: