Thousands poured into the Forbes Arena of the Morehouse College on last evening (November 2, 2018) including influencers and celebrities to attend the Get Out the Vote Rally with Stacey Abrams and Democratic Candidates across Georgia featuring former President Barak Obama. At the start, I was not sure if I wanted to attend this rally based on all the many projects I was working on.  However, by making the decision to attend a life altering moment for me occurred to be present in a time when the climate of hope, history and politics is shifting into a new direction. From that rally, I knew people were ready for change. What was even more remarkable, I was granted a VIP ticket with the perfect location surrounded by celebrities such as: Jermaine Dupree, Lynn Whitfield, Keisha Knight-Pulliam, Chris Tucker, Kandi Burris and hubby Todd Tucker, 2Chainz, Monica, Will Packer, Mayor Keisha Bottoms and the list continues.

Yes, I know the power we posses in exercising our right to Vote but last night was more than about the vote it was CHANGE.  The atmosphere was filled with thousands of voices united in song for one cause to urge all georgians to show up at the polls to cast their VOTE. Stacey Abrams, candidate for the highest office in the state of Georgia is bringing the heat with pure determination to win the election case close on official voting day Tuesday, November 6th. It’s a new day in Georgia and I believe the citizens of this great state is ready for change and a new choice.

Here is my PSA via Sammihaynes.com:

This is one of the greatest moments of our lives to make history in placing a brilliant woman of color in office to be the first to reign as Governor of the state of Georgia.  Yes, we can do it! On Tuesday, encourage, motivate and raise your voice for all georgian to Get Up and Out to VOTE. Your voice, Your Vote Matters! 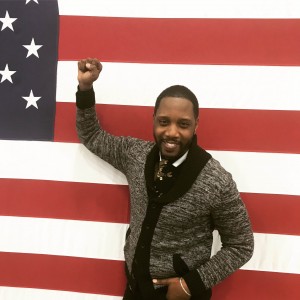 Written By
Sammi Haynes
More from Sammi Haynes
Since her entrance into film dating back to 2006 to producing successful...
Read More