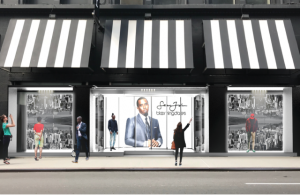 For the past couple days, I have seen the brand Sean John and Bloomingdales in the same sentence and page on Instagram.  Today, I happened to be perusing through Instagram saw it again on Jeff Tweedy Page the President/CEO of Sean John. So I took a moment to read up on what was swirling in the atmosphere because certainly, I was not about to be left out in the loop on what was happening in life of Sean John and Bloomingdales.

Apparently, the brand Sean John is celebrating 20 years of existence since its launch by founder Sean Combs originally in Bloomingdales men’s section. According to WWD, For the month of October, the store is converting the former David Burke restaurant space at the 59th Street flagship into a Sean John pop-up. The shop, which will have a separate entrance from the street as well as access through the men’s store, will sell a capsule collection of reworked pieces from the brand’s previous collections including the velour tracksuit, fur snorkel jackets, suede coveralls and leather track jackets.

Wait! This right here is a moment especially if you are a lover of the Sean John velour tracksuits. Man, I was and still in love with those tracksuits.

“You won’t see all baggy clothes,” said Jeff Tweedy, president of Sean John. “We’re taking iconic pieces and tuning them to current fashion.” He said the velour tracksuit, for example, hasn’t been produced for more than a decade, but is being reinvented in five colors for the shop.

The shop will be christened on Tuesday with a “conversation” between Tweedy, Kevin Harter, Bloomingdale’s group vice president of integrated marketing, and celebrity stylist June Ambrose.

It is exciting to know New York will not be the only Bloomingdales location for the 2o year celebration; however branch stores in major cities the Sean John Pop-Up Shop will appear in petite version. Yes, Atlanta made the list!

Smaller iterations of the shop will be installed in several branch stores including Lenox Square in Atlanta, Beverly Center in L.A., North Michigan Avenue in Chicago, and Roosevelt Field on Long Island for the month of October.

Written By
Sammi Haynes
More from Sammi Haynes
The one of a kind Street Style designer and Harlem Couturier, Daniel...
Read More