I feel like a boss bitch. I’m grabbing my nuts like, yeah! says Taraji according to Instyle Magazine

Taraji P. Henson is undeniably a force of nature the world has fallen for with her iconic charm and witty personality. The ageless beauty constantly defines her own path to living out loud. Henson sounds the alarm on the cusp of the New Year 2019 fearlessly ready to enter like a boss on the January Cover of Instyle Magazine. The power she exudes on this cover not only permeates from the hair, makeup and fashion styling but it radiates from her inner existence.

The Instyle article talk about Henson’s new movie What Men Want that she stars and serves as executive producers, her new animated character Yesss in Ralph Breaks the Internet, her new foundation the Boris Lawrence Henson named after her father to stimulate conversation around mental health, her comedic personality, her strong sense of self and more. 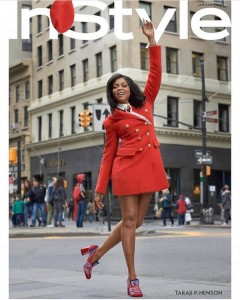 A couple of days ago, I was planning to post the graphic treatment, Prada square toe jacquard knit loafer pumps to my insta story. Then to see my girl Taraji stopping traffic for a stride in style wearing the Prada pumps for a memorable Instyle editorial, epic. She looking like a modern day Mary Tyler Moore from her 70’s hit show The Mary Tyler Moore Show. The styling is simply impeccable reminiscent of the 70’s.

Written By
Sammi Haynes
More from Sammi Haynes
upon arrival before any signs of the conference in view only one...
Read More