One of my favorite movies of all times is shaping into an original series in less than five days crafted by BET network with executive producers Halle Berry and Lena Waithe. I can’t wait!

Boomerang hit the big screens in 1992 with an all star cast featuring Eddie Murphy, Martin Lawrence, Halle Berry, Robin Givens, Grace Jones, the iconic late Eartha Kitt and many more top main stream actors at the time.  I can remember as a teenager this movie left an indelible mark in my mind that people of color can be fashionable, decision makers and in power. Plus, not to downplay the fact real love can always win beyond the superficial. 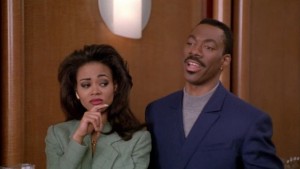 According to BET.com, Richmond’s character Bryson, son of Jacqueline Boyer, is described as resourceful, tough and charming. Raised by a single mother, he’s self-assured and doesn’t hide his vulnerability. Every bit as driven as Simone, Bryson wants to make his mark on this world.

Jackson’s character Simone, daughter of Marcus and Angela Graham, is described as privileged, beautiful, cool and driven to a fault. She has an easy confidence that she inherited from her father, but a down-to-earth, chill vibe, which she inherited from her mother. The shadow of both her parents looms large and she is eager to step out of it and make a name for herself.

Here is a sneak peak: