I know this post is late, but I am finally catching up on Season 3 of HBO’s Insecure with Issa Rae. It was a pleasant surprise in episode 5 for Lawrence to resurface into the story line. I remember at the top of the season there was alot of buzz about Jay Ellis, who plays Lawrence not returning for Season 3.  The Lawrence fans were outraged and quickly took to social media and started blowing up the network to express their feeling about the character not returning, which resulted in a voting campaign to Bring Back Lawrence.

Although in the new season, Issa has fallen madly in love with Nathan, played by Kendrick Sampson an equally handsome caramel cappuccino with green eyes. But honestly when Lawrence stepped onto the scene it was more like Nathan who (lol) at least from the audience point of view.  The character Lawrence possesses a debonair quality that is irresistible.  In spite of the love hate relationship between Lawrence and Issa, he is not a character the fans and I is open to see just phase out.  We want more! 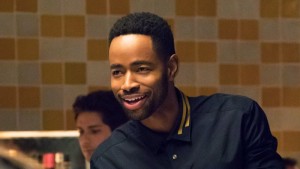 Actor Jay Ellis is tall, dark and lovely to be behold. Thank God the fans rallied around securing his spot as Lawrence on the show.  Now, we are no longer insure but secure in the fact this season is the bomb.