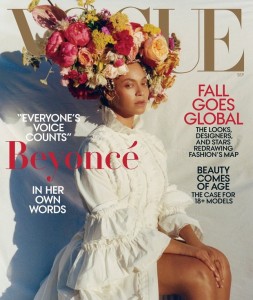 The iconic Superstar, Beyonce shares her personal journey to body acceptance and taking full ownership of her life. In the September Issue for Vogue Magazine, Beyonce is flawless on the cover radiating like a bright beautiful summer day.

(According https://www.vogue.com/article/beyonce-september-issue-2018) Beyonce stated in a her recent cover story, After the birth of my first child, I believed in the things society said about how my body should look. I put pressure on myself to lose all the baby weight in three months, and scheduled a small tour to assure I would do it. Looking back, that was crazy. I was still breastfeeding when I performed the Revel shows in Atlantic City in 2012. After the twins, I approached things very differently.

I was 218 pounds the day I gave birth to Rumi and Sir. I was swollen from toxemia and had been on bed rest for over a month. My health and my babies’ health were in danger, so I had an emergency C-section. We spent many weeks in the NICU. My husband was a soldier and such a strong support system for me. I am proud to have been a witness to his strength and evolution as a man, a best friend, and a father. I was in survival mode and did not grasp it all until months later. Today I have a connection to any parent who has been through such an experience. After the C-section, my core felt different. It had been major surgery. Some of your organs are shifted temporarily, and in rare cases, removed temporarily during delivery. I am not sure everyone understands that. I needed time to heal, to recover. During my recovery, I gave myself self-love and self-care, and I embraced being curvier. I accepted what my body wanted to be. After six months, I started preparing for Coachella. I became vegan temporarily, gave up coffee, alcohol, and all fruit drinks. But I was patient with myself and enjoyed my fuller curves. My kids and husband did, too.

I think it’s important for women and men to see and appreciate the beauty in their natural bodies. That’s why I stripped away the wigs and hair extensions and used little makeup for this shoot.

To this day my arms, shoulders, breasts, and thighs are fuller. I have a little mommy pouch, and I’m in no rush to get rid of it. I think it’s real. Whenever I’m ready to get a six-pack, I will go into beast zone and work my ass off until I have it. But right now, my little FUPA and I feel like we are meant to be.